The original ‘Beer Houses’ or ‘Tom and Jerry Shops’ as they became known, are viewed by many as the birth place of today’s pub. At this point in time beer was a rich man’s drink because of its high tax levels. The poor drank gin and lots of it, mostly in illegal gin shops.

Then in 1830, in an attempt to reduce public drunkenness, improve the health of the nation and encourage free trade, The Beer Act was passed. The act allowed anyone that paid a small fee to brew beer and sell it in their home, Beer Houses were born. It even allowed a low ABV beer, called Table Beer to be brewed for children, women and servants as the tap water was so unsafe!

A new generation of beer drinkers were born.

Craft Beer has made a huge comeback over the last few years, smaller independent brewers experimenting in styles and tastes and bringing the super hoppy beers back alongside sexy sours and New England IPA’s.

March 22, 2019 / All, Cambridge
Sherry and Food Masterclass with Thorne Wines Thursday 16 May, 7pm As part of Eat Cambridge we are hosting a Food & Sherry evening. Join Thorne Wines at the Pint Shop for ‘the perfect marriage’; a masterclass in the art of matching food and sherry. Tickets cost £45 and can be purchased here: Ticket price …
Read moreVisit Archive 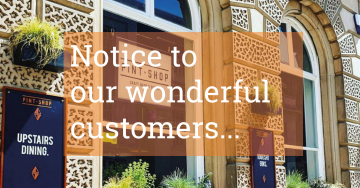 The past few days have been devastating for both our country and the hospitality trade. Pint Shop along with 1,000’s of other businesses up and down the land have seen our sales completely collapse in the space of 48 hours.
Today we’ve made the heart breaking decision to close Pint Shop until further notice. We have also had to end the employment of nearly all of our fantastic team, who have made Pint Shop what it is today. This is utterly devastating for all of us and we are working non stop to try and support them.
What will happen in the coming weeks and months is entirely unpredictable at the moment but we are absolutely determined to come out the other end of this horrendous situation, re-employ each and every one of our wonderful team and go again.
We’re going to miss your faces at our bars, but once this is over we promise to throw the biggest party ever.
Stay safe and see you on the other side.
x
Close